Exposing the lies of one of sports’ most successful frauds

Diana Nyad has drastically changed her abuse story since she began telling it publicly in 1989. Different versions of her allegations contain so many conflicting details that her claims can’t possibly be true.

In her 2017 New York Times op-ed, “My Life After Sexual Assault,” Diana Nyad contends that she had been “speaking out, loud and strong, for nearly five decades now.” That puts her in the late 1960s or early 1970s. But the earliest evidence of public allegations comes from years later:

Nyad repeats her claim at a 1992 dinner for the Community Crisis Center in Elgin, Illinois. She tells her audience that “she was brutally raped by her coach when she was 16” (Daily Herald, 28 June 1992). Five years later, she repeats the accusation at the 102nd Annual Conference of the American Railway Bridge and Building Association:

In an unforgettable span of perhaps two or three minutes, I suffered a violent, as I said, unforgettable rape at the hands of that coach.

But at some point after 1997, Nyad forgets the unforgettable and changes her story: “[H]e did not . . . you know, it’s always hard to say all these words, José, but he did not penetrate me, we did not have intercourse” (CNN Brasil, 10:05).

With the lesser charge comes greater frequency. Nyad begins vilifying Nelson to anyone who will listen. In addition to The New York Times, she has made her allegations to The New Yorker, The Atlanta Constitution, and in her 2015 memoir Find A Way. She has made them on NPR, CNN, MSNBC, KCRW, KQED, and Facebook. She has made them to organizations as diverse as Business Chicks, Beach Body, and the digital advertising company Kenshoo, Ltd.; to a parade of podcasters including Hillary Clinton and Oprah; to the Fort Lauderdale police, and in a sworn statement sent to Fort Lauderdale city commissioners. More recently, she gave a command performance for CNN Brasil.

Nyad’s first memoir, Other Shores, arrived in 1978, well after she would have been “speaking out loud and strong.” Yet, the book contains no hint of sexual misconduct. The Jack Nelson of Other Shores wants only one thing from Nyad and her teammates: hard work. He “helped me improve enough within that first year,” writes Nyad, “to become the best in the state of Florida at both the 100-meter and 200-meter backstroke” (p. 17).

However, her best-in-the-state claim exemplifies how years of lies eventually trained the public and the media not to question anything she says, no matter how contradictory or absurd or both.

Regarding the abuse, Nyad alleges all of the following:

Jack Nelson first abused her when she was

In total, Nelson abused her

After she told McMillan about the alleged abuse, he

But if Nyad spoke to McMillan sometime between 1971 and the first half of 1974, and McMillan let Nelson finish out the academic year, Nelson would have left Pine Crest by June of ’74 at the latest. As you can see below, however, he was on deck the next fall. Not until 1975 did he move on to coach the ’76 U.S. Women’s Olympic Swim Team. 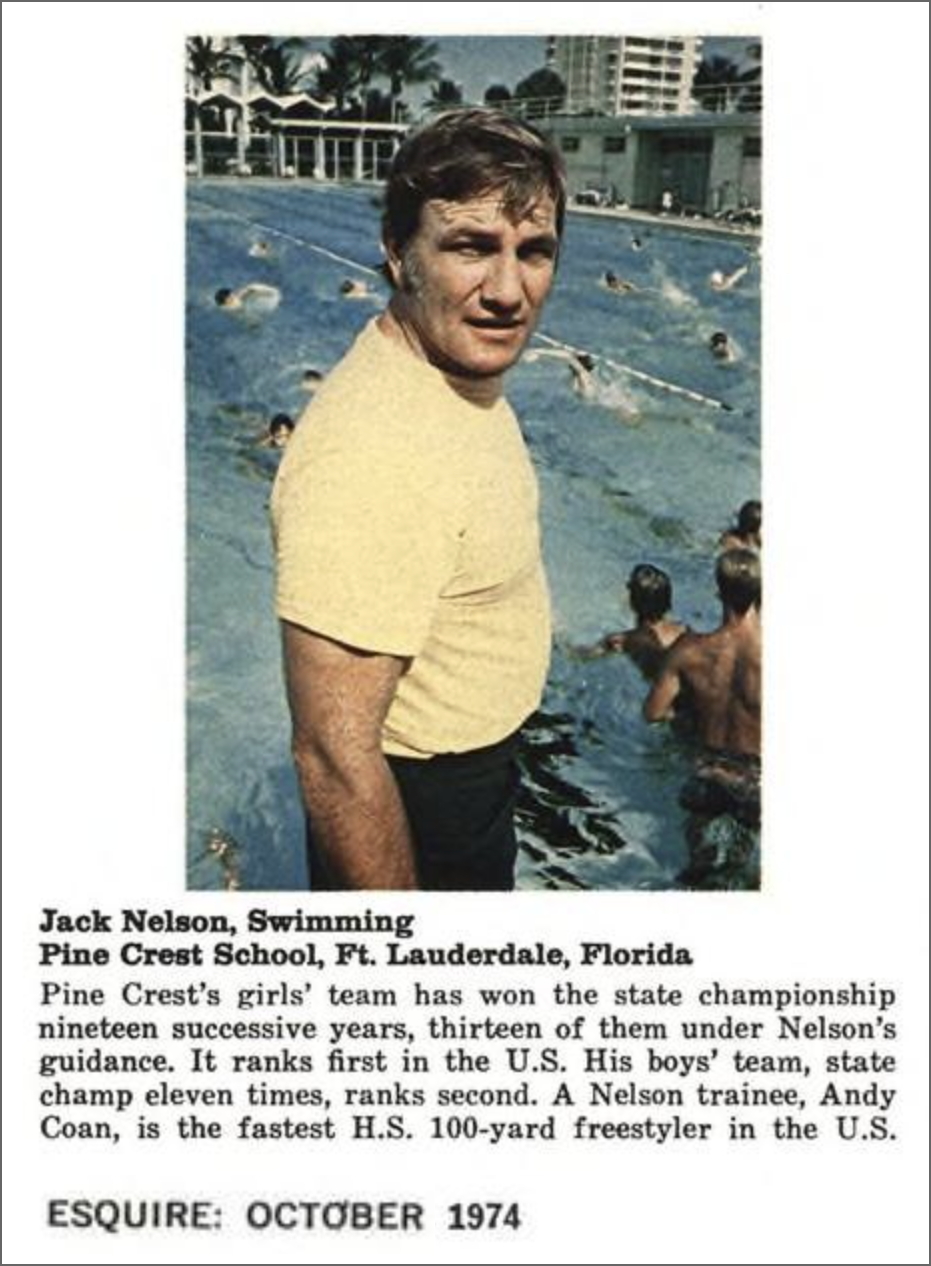 Nyad eventually settles on a story, the one she tells in Find a Way and in the original version of her New York Times op-ed. In that account, she claims that the abuse began in 1964 when she was 14. She says that she was resting at her coach’s house during the Florida state meet in Fort Lauderdale. But the state meet that year was in Gainesville, 300 miles away.

The Times issued a correction nine months after publication (below), changing “That summer, our school hosted the state championships” to “That summer, on the day of a swim meet.”

The last line of Diana Nyad’s New York Times op-ed, “My Life After Sexual Assault,” and the Times’ correction of a statement earlier in the piece (as of January 2021).

You’d think that such a significant error, particularly when it involves accusations of sexual abuse, would cause the Times to look into Nyad’s other “facts.” But no — they left the rest of her lies intact. In the new version, Nyad still underwent “years of covert molestation”; had been speaking out for almost five decades; and first told a friend about the abuse when she was 21, after which they went to Pine Crest’s principal, who fired Nelson the next day.

In Find a Way, Nyad claims that during the 1964 state meet at her school’s pool, she lost her race, “unheard of at that point, at the state level” (p. 46). But at the actual meet in Gainseville, she won at the state level for the first time.

In her 1997 accusations, Nyad claims that the first and only assault happened during the 1967 state meet — when she was 17 and a senior — and that she lost her race that night too.

But at that meet, she won her first state championship since 1964.

When Diana Spoke Out About Nelson

While Nyad was in high school, Jack Nelson coached for both Pine Crest School and the Fort Lauderdale Swimming Association (FLSA). In June of 1966, just after Nyad’s junior year — so either two years after he began abusing her, a year before he started, or somewhere in between — Nelson resigned from the FLSA over a swimmer eligibility dispute.*

*Nelson wanted to allow outside swimmers to train with the team — former Pine Crest students who had come home from college, for instance. The FLSA Coaches’ Committee wanted to limit membership to Fort Lauderdale kids.

Nelson quickly attempted to rescind his resignation. But the Coaches’ Committee liked it the first way, so they started looking for someone new. They added Nelson’s resignation to the agenda of the next board meeting.

Two of Nelson’s athletes spoke up for him at that meeting. According to The Miami Herald, the first, 17-year-old Dick Boling read a petition. The other gave a brief speech:

Diana Nyad, a swimmer, reminded the parents that “the club is for the swimmers. We need coach (Nelson). I can speak for 50 swimmers. If Coach Nelson doesn’t coach, we won’t swim.”

Nelson kept his job, though not for long. The FLSA didn’t rehire him in the fall, so he started his own team, the Jack Nelson Swim Club.

Nyad finished high school the following year and went off to college at Emory University in Atlanta, Georgia. When she returned during breaks, she needed a place to train. Fort Lauderdale offered some excellent options, but she always swam with Jack Nelson.

Nyad didn’t last long at Emory. During her first year, they expelled her for, among other things, trying to parachute out of a fourth-floor dormitory window. (According to Jane Shapiro of the Village Voice, “they said [Nyad] needed ‘critical psychological help.’”) Chicago’s Lake Forest University took her in, and that’s where she was enrolled during the first three years of her pro swimming career.

At the height of that career, Nyad wrote a revealing letter to her former coach. In July of 1971, about a month before her 22nd birthday, Nyad paired up with Quebec’s Gaston Paré to take on La Tuque, a grueling two-person relay in which partners take turns circling a ⅓-mile course for 24 hours. When the duo finished third, a local reporter raved that Nyad and Paré had “finally proved that they belong to the category of the greatest swimmers in the world” (my and Google’s translation).

After the race, Nyad needed to tell someone about her triumph. She chose Jack Nelson. “These swims have a deep-felt effect on me,” she wrote in a letter to her former coach. “I need to share them with someone who is capable of understanding” (“She Takes a Long Swim Off a Short Pier,” Sports Illustrated, 6 December 1971).

Nyad sent the letter on or about July 29, 1971. On August 7, she raced in lac St-Jean at Roberval, Quebec. On August 22, Nyad turned 22. Sometime between then and September 5, Nyad flew to England to attempt the English Channel. She had booked a September 8–20 swim window, but she needed to be in Dijon by the 14th, the first day of her study abroad program. The weather didn’t clear in time, so off she went to France.

In other words, Nyad had neither the time nor the desire to meet her friend (ostensibly in Michigan), tell her about the abuse, then dash to Florida to get Jack Nelson fired.

“I first gave voice to the details of the years of humiliation when I was 21; the sense of power it gave me was immediate.”

Nyad made that up, just like she made up a collaboration with Reese Witherspoon in the Time’s Up movement. There’s no evidence for that other than Nyad’s word. You’ll also have to take Nyad on faith that she started the National Archive of Sexual Abuse — formerly AgainstOurWillArchive. “Terrific people like Reese Witherspoon are helping to fund it, etc.,” says Nyad. (By the way, “et cetera” is one of Nyad’s tells. Hear her talk about Reese Witherspoon, etc., here.)

Nyad has claimed to be a leader in the Me Too movement as well. No evidence for that either, other than the frequent but never-substantiated allegations against her former coach.

She has declared that, before she dies, she’s determined to remove Jack Nelson from the International Swimming Hall of Fame. The Hall hasn’t inducted Nyad, but it gave her the Al Schoenfield media award in 2002. She used her acceptance speech to rail against Nelson. Later, she lied about the crowd size and the number of people who buttonholed her afterward. “400 people approached me,” she writes in Find a Way, “to ask me when something was going to be done about this guy.” But the room’s capacity was no more than 150, and most attendees supported Nelson.

No one has corroborated Diana Nyad’s abuse claims. The friend with whom Nyad says she shared her story in 1971 refused to speak with me. Not one of the 400 or 40 or four people who commiserated with Nyad after her Hall of Fame diatribe has said a word. Given all that, and given Nyad’s dysfunctional relationship with the truth, it looks like coach Nelson’s place in the Hall remains secure.

Diana Nyad announces that she’s going to be “Survivor #1.” From Slate’s Hang Up and Listen podcast, 20 November 2017.