Who Made This Thing?

I’m a musician from southern California. I play the fiddle, mainly, and have had the pleasure of working with many wonderful groups, including the Aman Folk Ensemble, the contradance band Turtle Creek, and the French-Canadian band Les Amis. From 1999–2020, I performed a solo show as Pierre Cruzatte, the fiddler with the Lewis & Clark Expedition.

Once upon a time, though, I was a marathon swimmer. I grew up in Claremont, California, about 30 miles east of downtown Los Angeles — or more to the point, about 45 miles inland from Point Vicente, where most Catalina Channel swims begin or end.

This is not to say that I grew up dreaming of swimming to Catalina. The Los Angeles Times occasionally carried items about people making the swim, so I was aware of the possibility. But I don’t recall ever considering it myself until later.

I started swimming competitively in the pool with the Claremont Crocodiles when I was 11 or 12, then swam and played water polo at Claremont High School. After graduating in 1975, I went to the University of California, Santa Barbara (UCSB). Neither my water polo nor competitive swimming skills were up to NCAA Division 1 standards. But I tried out for the water polo team anyway and received the expected-yet-still-distressing ax.

Without swimming and water polo, what was I supposed to do? Study? Not my forte at the time. If UCSB had offered a degree in bodysurfing, okay. But they did not, so I was at sea.

Philosophy 1 met in UCSB’s largest lecture space, the 862-seat Campbell Hall. Despite the crowd, I spotted a familiar face sometime during the first week of classes, someone I recognized from her occasional surfacings in the L.A. Times’ sports section. The long, shiny brown hair and those rosy-red cheeks — like she’d just come from sitting beside a campfire — gave Lynne Cox away.

It turned out that she was a freshman that year too. What’s more, we coincidentally lived in the same dorm, right across the street from the ocean.

I don’t remember how we started swimming together. But we did — early in the morning, before classes, we’d cross the street, walk down a set of stairs, then jump in and swim to the Goleta pier and back, about a mile and a half. Even on the coldest days, Lynne always got out of the water looking like she hadn’t left the fireside. My blue lips and chattering teeth told a different story, but I loved it all anyway.

By sharing the joy of ocean swimming, Lynne gave me an incredible gift. Without it, I don’t know what I’d have done.

That summer, I swam the Seal Beach 10-mile race. The following summer, I swam the Catalina Channel. In 1978, I completed a Catalina double in 19 hours and 32 minutes, the fastest ever. Eleven days later, my teammate John York swam it in 16 hours, 42 minutes. So much for the record books.

I raced in the third Ironman Triathlon in 1980, finishing the swim tied for second behind eventual winner Dave Scott. But it was all downhill from there (alas, only figuratively).

Diana Nyad was there working her first gig as an ABC Wide World of Sports commentator. Her vehicle pulled up alongside me during the bike leg. Nyad stuck her head out and said something like, “You were doing so well after the swim — what happened?” I can’t remember what I said, but it was the first and last time I spoke with Ms. Nyad.

I completed my final longish swim in 2010, a 12-mile race from Manhattan Beach to Santa Monica. My brother was my support team — thanks, Charles! I got first place in what was probably a field of one in the non-wetsuit division of the 50–54 age group.

I no longer swim, but I still think a lot about the water.

To expose the truth about Diana Nyad!

You mean: what motivates me to do this? When I started working on this site in 2016, I didn’t know the answer, but I think I do now.

When Nyad walked ashore onto Smathers Beach in 2013, I was skeptical. But I didn’t begin working on this site until after I saw this ad three years later: 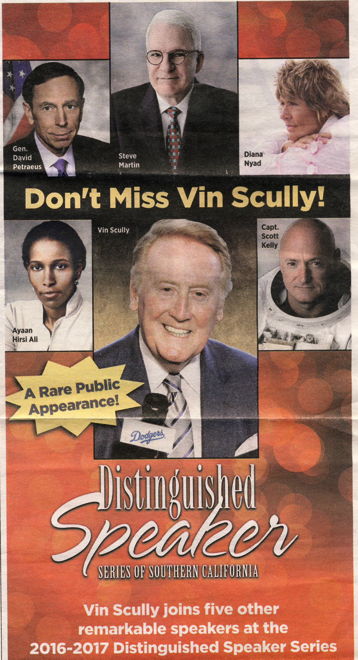 The faces that launched a thousand sites (minus 999).

The earthy, reassuring sound of Dodger announcer Vin Scully was a constant of my childhood. Scully, a master baseball storyteller, provided the voiceover for my early years. Seeing Nyad next to Scully was like seeing Rosie Ruiz next to Katherine Switzer, James Frey next to Alice Walker, or Jim Bakker next to the Dalai Lama. I had to do something, so I began working on this site.

But the Nyad-Scully ad turned out to be the catalyst, not the reason. Nyad herself helped me uncover that a few years later.

A little background. Nyad confines most of her claims to single, discrete events, for instance: “I was the first woman to swim around Manhattan,” “I swam in the Olympic Trials,” “I went to school at Berkeley,” or “I swam from Cuba-Florida.” Some of her lies broaden out into claims like “I won six state championships,” or “I was the best backstroker in the state of Florida.”

Nyad’s most expansive claim, however, and one she repeats ad infinitum, is that she was the greatest marathon swimmer of the 1970s. That’s not true, but I had no precise way to prove it — until she gave me one when she spoke in Los Angeles in October 2019. “I became,” she told her rapt audience at the Wilshire Ebell Club, “in the 1970s, the best ocean swimmer in the world. I held all the major records on planet Earth, out in the open sea.”

With that, she gave dimensions to her “best of the ’70s” claim.

So I began measuring. I address this in detail on the “Best of the ’70s” page. But briefly, I compiled two lists:

List #2 splits into roughly three categories of Great Swimmers of the ’70s:

Two facts jump out of the data. One was that Nyad never held a record for any major ocean swim. In fact, she never completed a major ocean swim. The other was something I knew but hadn’t consciously acknowledged: I had swum with, trained with, remain friends with, and still feel strongly connected to every one of the SoCal/Catalina-based swimmers on the list. And then it became self-evident what drives this whole thing.

As I mentioned, Lynne Cox introduced me to ocean swimming in 1975. I continued training with Lynne that summer, along with another phenomenal marathoner, David Yudovin. Lynne’s brother Dave was our coach. 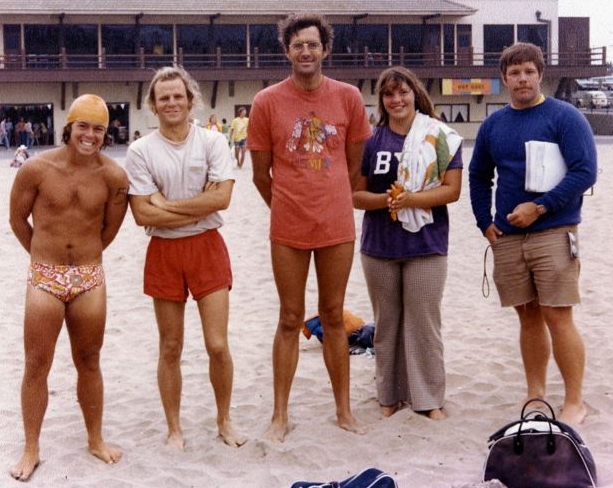 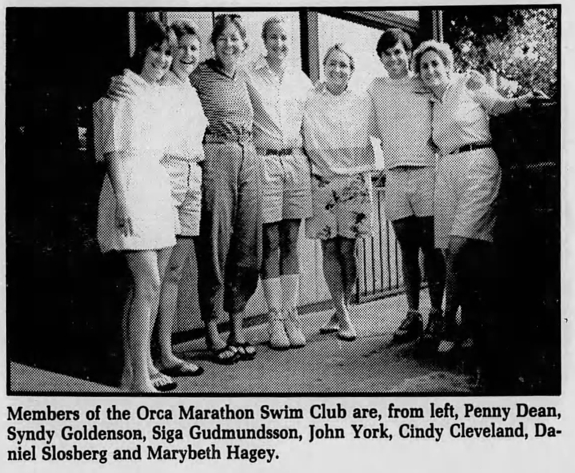 Remember how, in the movie “Forrest Gump,” Forrest keeps turning up in photos with historical figures like JFK, George Wallace, and Richard Nixon? In a way, I am the Forrest Gump of SoCal/Catalina-based marathon swimming of the 1970s. All but one or two (if that) of the Catalina successes in the 1970s were members of Orca and Seven Seas, the two teams pictured above. Only one person swam with both of those teams. It seems natural that that person, the one who had the luck and honor to train with and befriend every one of the SoCal/Catalina-based best-of-the-’70s swimmers, would be extremely pissed off if someone claimed, with no justification — but with the complete acceptance of a credulous public — that she was the best swimmer of the decade.

What’s more, I know somewhere beyond anger that I can’t let that claim stand. And that feeling is so strong that I could feel it in my body years before I understood it in my head.

I couldn’t have put this site together without the help and support of countless people. I’ve mentioned some of them within these pages, while others prefer to remain anonymous. To all of you, mentioned and unmentioned: I couldn’t have done this without knowing that you’re out there and that you understand the truth about Diana Nyad.

I also want to thank my family, the members of which have kindly listened (or not), nodded their heads (or looked at their shoes), and laded (not necessarily willingly) more Diana Nyad cargo than anyone should have to bear in a lifetime. 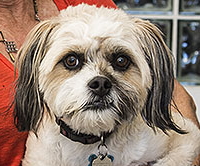