Inflate four hours to 37 and 30 entrants to 444. Chill 65-degree water to 48 and reduce 10th place to third. Season with atrocious sportsmanship. Voilà — Nyad’s unstable tales of her first professional race. 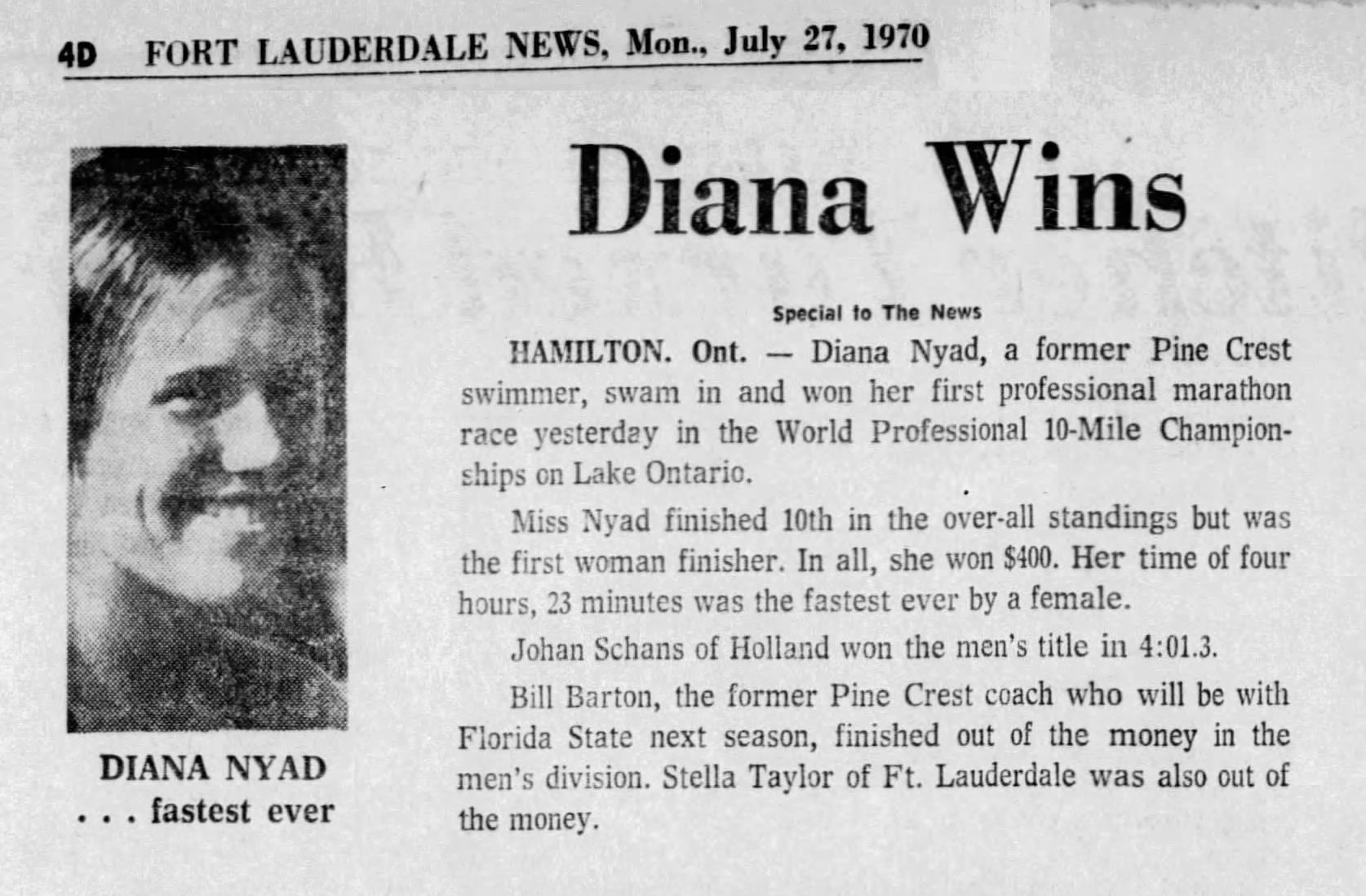 In July 1970, Diana Nyad headed to Hamilton, Ontario, for her first professional open water race, the ten-mile Labbat’s International Championship. Swimming under ideal conditions — little wind, a warm sun coaxing the water temperature into the mid-60s — Nyad set a women’s record of 4:23. She finished 10th overall out of a field of 30, and she beat five-time world champion Judith de Nijs by twelve minutes. A great debut by any measure.

But it has never been enough for Diana Nyad.

By 1978, Nyad was reporting that the participation had doubled and the temperature had dropped: “[T]he water temperature was 62 degrees, and out of sixty professional swimmers, I finished tenth” (Other Shores, p. 31).

A four-hour swim can hardly be called epic, so Nyad also inflates the time. In a presentation last May, her 4:23 ballooned to over 18 hours. In her 2014 Beachbody program, Nyad reported winning at Hamilton by swimming across the lake — rather than 20 times around a half-mile course near the beach — in 37 hours and 38 minutes.

Ideal conditions also fail the epicness test, so Nyad fiddles with the thermostat. She drops the water temperature — variously reported between 64 and 66 — down to 48. Neither she nor most of the other entrants could tolerate that for four hours, much less survive it for 18 or 37.

After messing with distance, time, and temperature, Nyad, who once said, “I don’t bad mouth other swimmers,” bad-mouths Judith de Nijs. Nyad attacks de Nijs and other female athletes so often, in fact, that the bad-mouthing gets its own page. Suffice it to say here that Nyad can’t tolerate anyone being perceived as better than Diana Nyad. Judith de Nijs won pro marathon swimming’s World Championship six times. Nyad took the crown once, and then only on points. (See “When is a world champion not a world champion?”)

So, to make herself feel better, Nyad crouches behind a façade of superiority and takes potshots at one of history’s best professional marathon swimmers, an athlete who long ago left Diana Nyad in her wake.

You’ll find the most detailed descriptions of the 1970 Hamilton race in Joe Grossman’s A History of Marathon Swimming and The Windsor Star’s “Holland’s Schans repeats in Lake Ontario marathon.”